You might think leaving a wooden boat without an automatic bilge pump for almost five months is asking for trouble and I will admit I have never been comfortable with the concept. But I have spent a lot of time aboard Rainbird dealing with potential sources of fresh water leaks, which, of course, is deadlier than salt water in a wooden boat. In fact, when I repainted the decks a couple of years ago I re-caulked almost everything.

The previous owner warned me to keep the bilges dry. The builder left a lot of the interior cedar planking untreated – even in the bilges. It’s been like that for 35 years and appears absolutely fine but if water ever accumulated things could change very quickly. Maybe he thought untreated cedar breathes and in the daily heating and cooling cycles, condensation never forms. I lined the hulls of my Tiki 26 catamaran with quarter-inch thick cork tiles for this reason. They gave great insulation and their porous surface never allowed condensation even in bunk areas.

Surprisingly, with just the hatches cracked open for ventilation and no internal heat, Rainbird wintered very well. When I left in the fall I pulled up some of the cabin sole and left drawers and lockers partly open. I think solar heating through her pilot house windows allows a certain amount of air moment and drying. She smelt a tad musty when I arrived in early March but within a few hours that had gone.

An automatic electric bilge pump would be a good safety feature. Although Rainbird has a large manual pump stowed in a locker it could take valuable seconds to get it set up and working.

Before heading offshore I need to figure out a different system, perhaps with the manual pump mounted in the cockpit (but not using the cockpit drains). Being a “belt and braces” type I am also considering a Y valve on the engine’s raw water intake to pump bilge water in an emergency.

No matter how sound she may be right now, a rock, dead-head or some tsunami debris could change that very quickly. And I have been warned; while single-handing through the Gulf Islands a couple of years ago I hit a reef while entering a tight anchorage. Even though I was only doing a couple of knots under power I scared myself enough to have the cabins soles up within 20 seconds from impact! Thankfully not a drop of water where it shouldn’t have been. When I next hauled her out I wasn’t surprised to find a few inches missing from the front of her lead fin-keel and further examination revealed a previous repair. Stuff happens when navigating these rocky shores. 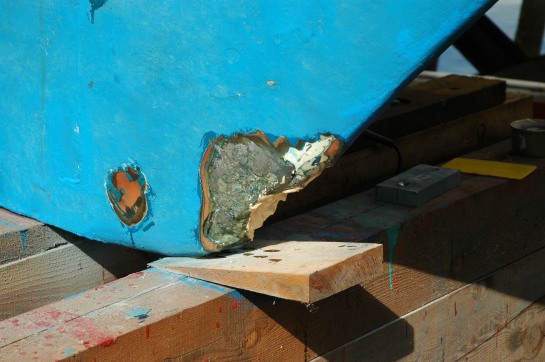 The bottom of Rainbird’s keel was damaged when she hit a reef. A previous repair was revealed after grinding the damage back. I used multiple layers of epoxy and micro-spheres to fill the damaged area. Not too much at once as it gets hot and sags. I finished the job with a grinder and a coarse file.

The finished repair, ready for paint.