Here are several spectacular wooden boats that caught our eyes as we sailed between the Gulf Islands and Desolation Sound this summer.

“Native Girl” was designed and built by West Coast legend Allen Farrell. She is 48′ overall, with a beam of 10′ 6″ and a draft of 5′ 6″. She was launched in 1965. For more information on artist and boat builder Allen Farrell and his wife Sharie go to http://allenfarrell.com/

“Native Girl”, built and designed by Allen Farrell, seen here in Silva Bay. Note the yard-arm for the square sail.

I couldn’t resist including this photograph of Allen’s last boat, which I came across in Pedder Bay in 2009. The story of Allen and Sharie Farrell is fascinating and documented in “Salt on the Wind” by Dan Rubin and “Sailing Back In Time” by Maria Coffey. Both “Native Girl” and “China Cloud” are breath-taking designs!

Normally at home in Thetis Island, “Grail Dancer” made a short visit to the Cowichan Bay Maritime Society in August. This beautiful 61′ (L.O.A.) schooner, is based on the lines of a 19th century Noank Well Smack. For more information – http://sunrisegrail.com/?action=GR-gallery

She was built by Maureen and Wayne Loiselle and was launched off a beach in 2000. 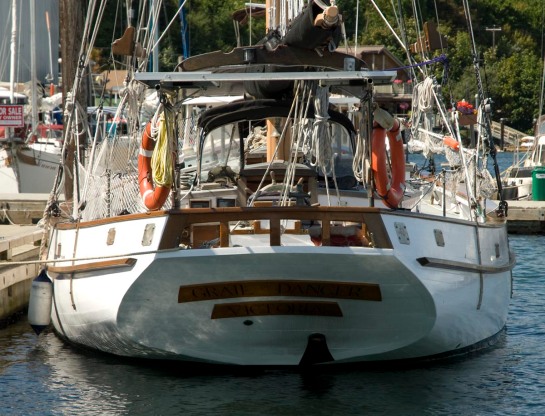 “Taihoa” is 48′ (L.O.A.), design by George Band, launched in Vancouver in 1947. She is seen here during a haul-out on the newly refurbished ways at the Cowichan Bay Maritime Centre. 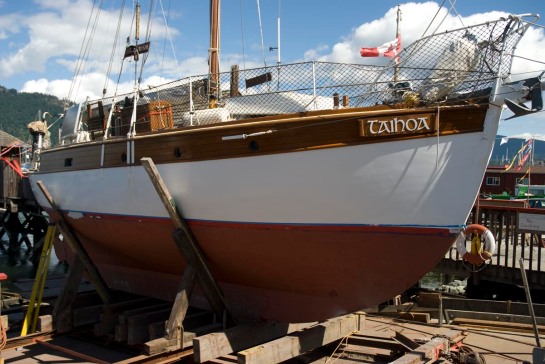 Finally, we came across this attractive Aitkin designed cutter in Squitty Cove on Lasqueti Island.