I had heard that Desolation Sound was “one” of the “Holy Grails” of the cruising world – a must see. Here the salt chuck is warm enough to languish in it for hours without a wetsuit. The summer days are long and balmy and rugged peaks thrust skywards amongst deep channels and cosy anchorages.

After a brief visit this summer I can attest that these facts are true. What is missing from this description of a cruising paradise is the fact that Desolation Sound can hardly be considered desolate when it comes to human visitation.

I’ll admit to being very naïve when I visualised sheltered, secluded anchorages. I hadn’t realised that it is probably one of the busiest yachting playgrounds in the world. The sheer numbers of boats, mainly US registered, and the numbers of very large boats (60′ plus), boggles the mind.

Well, it was August, and a long weekend, but I would guess that the majority of boaters here don’t have to organise their vacations around long weekends.

The sun scorched and the heat and humidity seemed tropical. Thankfully we found relief in the refreshing waters of Melanie Cove by swimming for half an hour while Rainbird was at anchor with a stern line ashore – the standard procedure in these waters to cram as many boats as possible into the tight space.

Power boats outnumbered sailboats by at least 5 to 1 and at one time I saw a raft of 4 substantial power boats being “driven” around the cove in what could have become an insurance assessors nightmare!

Boats came in various shapes and sizes too. A high performance 30 something foot power boat, all engine and very little cabin, anchored beside us. Without a dinghy the stern tie was achieved by backing up carefully to the steep shore and dropping off one of the kids with a rope. Later, dad hung over the stern barbequing supper – where they all slept I have no idea but it was an adventure they will no doubt remember for a long time.

Despite the crowds everyone seemed in good humour, although at times my patience was challenged. Like the time in Refuge Cove where we motored in lazy circles for 45 minutes waiting for dock space that never materialised. We needed some basic supplies and in the end gave up and headed across to Squirrel Cove on Cortes Island. More luck there although I had a last minute fight with a nimble power boat that tried to squeeze in ahead of me just as I was about to step ashore with my lines. Only a quick application of reverse saved the day.

“I have to find a mechanic to fix my boat,” was the excuse provided by the skipper. I very nearly suggested that he should also find himself a fibre-glass technician as he was obviously going to need one if his impatience continued. I pointed to a more than adequate space on the other side of the dock and he zoomed off to take it, leaving me space to take a second run at it.

We got all we needed from the Squirrel Cove Store and by the time our laundry was dry I decided to stay the night on the dock. Good choice, as early the following morning, “Song of Joy”, a very substantial sloop, adeptly squeezed into the space ahead of us. A rather weary skipper explained that it was blowing very hard in the cove during the night and a power boat dragged into them and their anchor rodes became entangled, requiring him to cut his chain to get free.

The power boat was still fouled up and I later saw the skipper flying across the bay in his 30hp centre-console tender to pick up a diver. I don’t know the final outcome but we did spend the following night in the inner cove despite the warning. My wife counted 100 boats before giving up and I saw one raft of 11 boats. That evening, I heard the tannoy of a very large boat, sufficiently loud to alert the whole cove, hail the skipper of a smaller boat in the process of anchoring; “We have 100′ of rode out and when we swing in the night you are the prime target!”

Twenty years ago when I cruised the west coast of Britain in an open-deck Wharram catamaran, I probably saw as many recreational boats in 3 months than I did in a day in Desolation Sound.

The experience has made me question my somewhat romantic notions of cruising. For many, climbing aboard a boat is now like climbing into any recreational vehicle. Engines are fundamentally reliable, the state of the tide can be found on the screen of an iPhone, and with chart plotters and radar, being lost is almost inexcusable. Radar antennas twirl relentlessly and GPS alarms beep and it’s possible to get from Seattle to Juneau without ever donning oil skins or getting a foot wet.

Two or three times daily I rowed our little dinghy ashore so that our Portuguese Water Dog could do what dogs need to do. I only saw two other tenders actually being rowed during the whole two-week trip – the internal combustion engine reigns supreme even when a pair of oars would be perfectly adequate.

In the cold winter months I will ruminate on this experience. In the end I will just probably conclude that the Slocums, Hiscocks and Smeetons of this world are long gone and with them a golden age of cruising. My romantic notions, seeded 25 years ago, are now probably a nonsense.

So do we want to head back up there? The answer is a conditional “yes”. We would do it out of season, when we could drop the hook where seamanship dictated and not where I had to squeeze into a space amongst other boats and would then spend the night worrying where I was swinging. But there is still the lure of the North. The Broughtons beckon – thousands of islands and surely less boats. Failing that, Patagonia perhaps? 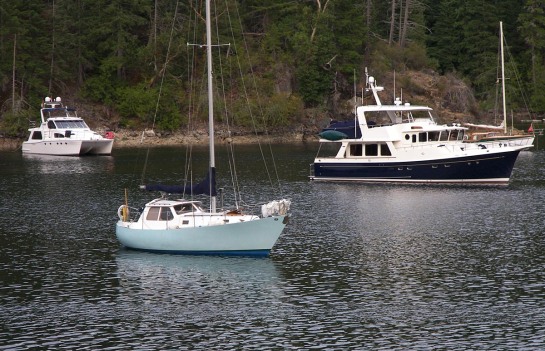 Rainbird at anchor in Squirrel Cove, Cortes Island…..just one of more than 100 boats in the cove.